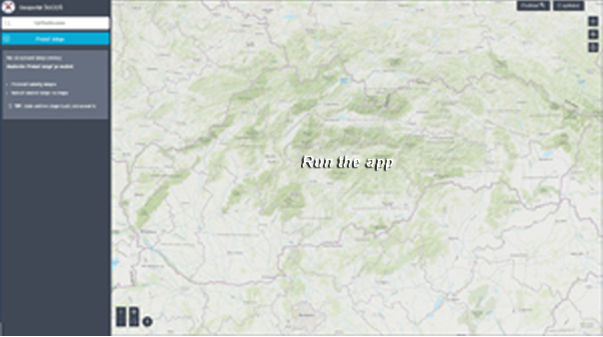 The geological map is a two-dimensional representation of the spatial geological structure of the area, projected either on the earth’s surface or on an imaginary pre-Quaternary spatial surface. The individual bodies follow each other in logically arranged spatial relationships, which are either exactly mapped or are the result of geological interpretation. For better clarity, geological maps also show structural elements that emphasize the spatial relationships between individual bodies and layers.

The development of computer technology in the last decade has enabled SGIDS to create first local, later regional 3D geological models. The acquired know-how enabled us to implement an ambitious plan, to create a basic 3D geological model at a scale of 1: 500000 at the national level.

A 3D geological model of the Slovak Republic at a scale of 1:500 000 was created at the State Geological Institute of Dionýz Štúr in 2016-2019. The basis for his work was:

The resulting 3D model is a hybrid one, consisting of vector objects and a 3D raster (voxels) in the entire volume of the modeled space. Vector objects are displayed in webGIS in real time (tectonics, boundaries of modeled layers, earth relief and basement of the model). Voxels are used to form pre-prepared view compositions (sets of boreholes and / or perpendicular profiles and / or horizontal sections).

WebGIS application allows viewing of many 3D datasets (models). Here are published regional 3D models (Horná Nitra, Turčianska kotlina, the territory of the TransEnergy project) and the 3D geological model of the Slovak Republic in the scale of 1: 500000. The application allows user to set up  the transparency of layers, turn them individually on/ off and so on. The most important functionalities of webGIS are (their selection is on the right side of the desktop):

All 3D models have real [XYZ] coordinates, which allows, for example, the simultaneous display of the earth’s surface in different variants (basic map, topographic map, aerial images, etc.) or other layers.

The 3D geological model is regularly recalculated and updated after entering new data (especially other wells).

Maps and data
Go to Top