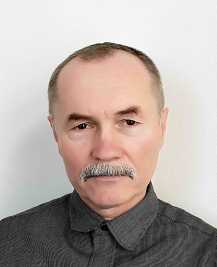 Study at Mining Faculty (nowadays BERG Faculty) of Košice Technical University he finished in 1981 (Dipl. Eng.) and postgraduate study (PhD.) he completed at the Department of Engineering Geology of Faculty of Sciences at the Comenius University in Bratislava in 1992. Since 1981 he worked in Engineering Geology department of the Geological Institute of Dionýz Štúr, regional centre of Košice. As a researcher he was engaged especially in engineering geological mapping and slope deformations registration in the territory of Middle and Central Slovakia. Since 2009 as a senior researcher he participated on many national and international projects at the position of manager or collaborator. In the 1981–2006 period he was nominated into the position of Deputy Head of the RC of the SGIDŠ in Košice, at the end of 1995 as became its Head. Since 2010 he is the Head of the RC again.

As an engineering geologist he is engaged mainly in preparation of engineering geological maps and maps of geological factors of the environment of different scales, registration of slope deformations, creation of directives for engineering geological maps preparation, monitoring of geological factors of the environment and during last years also environmental loads. Besides many national projects he managed also a several international ones (e.g.  DANREG, KOŠICE – ABIOTIC and BIOTIC PART of the ENVIRONMENT – manager of partial project at the SGIDŠ; COST 625 Action; INTERREG IIIB – SISMA – project manager in Slovak Republic). He publishes his own results of research, as well as exploratory works in national and foreign journals (about 100 works) and presents them also in various symposiums, conferences, workshops all over the world, reviews contributions in scientific journals, projects, diploma and PhD. theses and assesses the environmental impacts (EIA) in national level.

Solved projects (5 the most important)